Here it is again, the week of Poppy Conflict. Every year, this happens. Most people around me are wearing the red poppy to keep Remembrance Day. And I- I avert my eyes from the young cadets with their poppy trays in front of the drugstore, and sidle by, trying not to be noticed. Why? 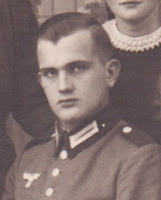 Because the language that goes with wearing the poppy says that "Let us remember those who fought for our freedom!" Well, according to that statement, my family fought against freedom. My uncle fell on the Russian front (aged 22), my grandfather was killed by an allied bomber (leaving a widow with four children under nine years old, the youngest a newborn), my uncle-in-law was left on the fields of Normandy (he wasn't even 20). Lest we forget. If wearing the poppy means honouring the veterans who "fought for freedom", then would it not also mean dishonouring those who fought against them- whether they wanted to or not?

To be honest, it's the language that gets me. The rhetoric of honouring the sacrifice of the allied soldiers of World War II. Don't get me wrong- PLEASE don't get me wrong. I honour the men and women who fought in the wars, who sacrificed their lives- if not literally by dying, then by spending years of their lives separated from their families, having to endure the horrors of combat and the pain and tedium of Prisoner-of-War camp. That, too, is a sacrifice of one's life.

No, it is not that that which, up to now, has kept me from wearing the poppy. It's that the language of heroism still permeates Remembrance Day. They "fought for our freedom". Yes, they did. But they hardly had a choice. Their country went to war, and so they marched. As 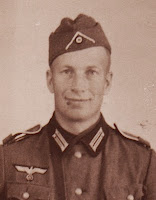 did those on the other side. Do you think my grandfather wanted to leave his pregnant wife and three small children to look after the farm alone? He died because he was a farmer who could not swim. In an air raid on his army base, he tried to run for shelter and drowned in a pond he had not seen in the dark. The bomber pilot- American, English, perhaps even Canadian- who flew the raid, was he any more of a hero, any more of a freedom fighter than this man who had no interest in politics, who just wanted to be left alone to live his life- but was on that army base because he had no other choice? The pilot, too, had no choice. Both of them lost their lives, in one way or another, to forces greater than themselves. 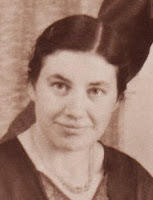 Yes, there was much heroic action on both sides of the war. And some of that action was on the part of a woman who, on Christmas Eve 1944, was confronted by two army officers delivering the news of her husband's death, and who kept the news to herself for another day so as not to spoil her young children's Christmas celebration. Countless acts of heroism, by countless humans all over the globe, caught up in forces beyond themselves. Remembrance Day, for me, is about remembering what happened, reminding ourselves of what still is happening, so that we never again allow those forces to build to such a point.

I might be able to wear the poppy, after all. Lest We Forget.
Posted by AMOffenwanger at 09:51