It's New Year's Eve. Oddly enough, in German, it's called Altjahrsabend, Old Year's Evening. Which just goes to show that word-for-word translations are often quite useless. The English word "eve" usually means not "evening", but "evening before", whereas the German "Abend" only means "evening". So the Altjahrsabend is the evening of the old year, whereas New Year's Eve is the beginning of the new. The one to reflect on what's past, and peacefully go to bed, the other to look forward to what's coming, and throw a party and get drunk to get off to a good start.

Actually, most Germans don't call it Altjahrsabend, anyway. The official name is Sylvester. Now, that has nothing whatever to do with pugilistic actors or bird-stalking cartoon cats - nothing more, that is, than that all of them are named after the same guy, St Sylvester, who was Pope around the time of Constantin the Great. And he ceased being Pope on December 31st, 335, by way of dying, therefore making it his feast day.

There's a pretty nifty story about St Sylvester and a dragon, which had such bad breath it wiped out three hundred men a day just by breathing on them (what they were doing, hanging around the dragon's pit, is anyone's guess). St Sylvester, on the instructions of St Peter (whom he saw in a vision), went and recited a part of the creed at the creature, then wrapped a thread around its snout and sealed it with the papal seal, which apparently put paid to its halitosis. He and his two assistants, being equipped with heavenly gas masks, got out unscathed, but two pagan enchanters who had come for a looky-loo weren't so lucky; they were passed out at the gates of the dragon's den when St Sylvester came climbing back out. The Saint, being of the saintly sort, raised them from their near-dead state, and brought them along with him, and anon, the Golden Legend says, they "were baptized, with a great multitude of people with them". 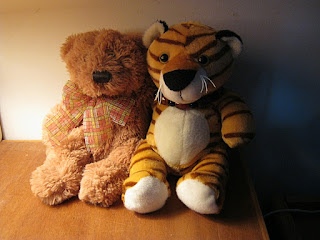 Incidentally, I didn't know this story of St Sylvester and the Dragon, myself, until I looked up the Saint on the 'net just now so I could tell you about him.

And on a completely different note, here's a picture of Steve and his new companion, Horatio, who is a philosopher ("There are more things in heaven and earth, Horatio, / Than are dreamt of in your philosophy"). Horatio is Yorick's little brother, and came to live with us at Christmas.

Life, the Universe, Sylvester, and Horatio. Happy New Year, all!
Posted by AMOffenwanger at 10:50