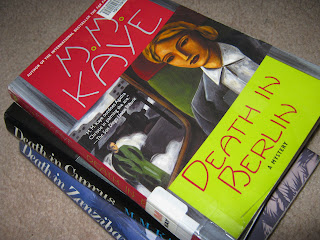 I really like mystery novels. It's a little odd, that, as I loathe and abhor violence, and you pretty much can't get any more violent that murder. But for some reason, reading about cranky old rich men being offed for their money doesn't disturb me, probably because it's not a fate that's likely to ever befall me - I'm not a man, will (alas) probably never be rich, and as for being cranky and old, I'm hoping to stave those off for a while yet.

Actually, there is a weird sense of safety in reading murder mysteries - the kind I like, anyway, which are the English cozies, preferably the genuine "Golden Age" article à la Agatha Christie & Co. They're set in a proscribed circle of people, in a time and place far removed from my own reality, and the sleuth always finds out whodunnit, so justice is served and peace restored. And if the story includes a charming romance between a pretty young girl and a handsome young man (amateur detective, part of "the Force", or simply mysterious stranger, I'm not picky on that), then my satisfaction is complete. Ah, escapism.

However, there's one thing that strikes me as being a genuine mystery, in reading mysteries. It concerns those aforementioned charmingly beautiful young girls. In addition to being charming and beautiful, they are usually also quite intelligent - it's part of what makes them so well suited for being a focal point of the story. They see the clues, they sense that something is wrong, they shiver in the cold draft emanating from the sinisterly-left-open window and jump when the soft-footed tabby cat silently brushes by them in the darkened room where they sit, thinking about the handsome young man who is so disturbing to their tender feelings but might still be the murderer. They even almost solve the mystery, usually. However, they seem to be afflicted by a peculiar disability.

See, it's like this: whenever one such girl is told, usually by said handsome young man of chiselled brow and masterful demeanor, that she should not, under any circumstances, tell anyone of her suspicions (which she has just voiced to him in the darkness of the night, leaning on the balcony railing overlooking the rose garden) - or, alternatively, that she should not, whatever else she may do, leave the house without informing him of it (this is usually accompanied by a look of more than usual seriousness from the grey/brown/deep-blue eyes of said handsome gent) - somehow or other it seems to cause the girl's brains to trickle out of her pink and shell-like ears. Or something like it.

Because as soon as a directive of this kind is issued, the girl is guaranteed to do the very thing she was told not to do. She hears the command, fully agrees to it, but somehow always figures that it must not apply to Mrs White (who is, after all, only the cook), or Colonel Mustard (who is surely too pukka sahib to have done anything so sordid as commit the murder), with the inevitable result that she spills the beans to and/or leaves the house in the company of the murderer him- or herself. Of course, as anybody could tell her, it directly leads to her undergoing several pages' worth of hair-raising suspense, being menaced by said murderer in the kitchen/conservatory/ball room with the revolver/rope/lead pipe while he or she monologues about his or her reasons for committing the murder and gleefully prophecies that no one will ever find the girl's body, foolish thing. All of which she could have avoided if she had only paid attention to what she was told.

So what do you think - auditory processing disorder? Something that affects only one very small part of what she's hearing? Because it can't be stupidity; the whole rest of the book establishes very clearly that the girl in question is not stupid.

Ah well. It doesn't really matter all that much, because, fortunately, in the nick of time, just as the murderer is about to pull the trigger/tighten the rope/swing the lead pipe, he of the chiselled features comes bursting (or, alternatively, stealthily creeping) through the french doors, incapacitates the villain (having taken careful note of the monologued confession which clears up the remaining questions about the murderer's guilt), then roughly pulls the girl into his arms while angrily exclaiming "Don't ever do this again, darling!" and presses a hard kiss on her trembling lips, thereby removing the last vestiges of doubts that the girl had about her feelings for him, and/or making her realize for the first time why she always went weak at the knees whenever he glared at her (which she had previously taken for a sign of dislike). D'oh. The End.

Life, the Universe, and Mysteries. It's a mystery, what?
Posted by AMOffenwanger at 13:56