This is a signpost to let you know that the active version of amo vitam, or "Life, the Universe, and a Few-Odd Other Things", resides over here: www.amovitam.ca. Has done so for a number of years now. Just in case you're wondering, and have stumbled on this page in search of erudition from a writer and her stuffed bear.
Meanwhile, here's a photo of Steve reading Shakespeare. 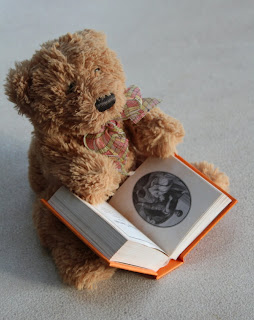 Posted by AMOffenwanger at 13:36 No comments:

It's come to my attention that some of you, who've been following this blog over here, and then subscribed to the postings on the new page, aren't getting mail notifications of new blog posts from over there (you should have been getting several over the last few weeks). Just to be on the safe side, try subscribing again: go to www.amovitam.ca (or www.amovitampress.wordpress.com), and put in your email address in the "subscribe via email" box on the top right corner of the "Home" page. You don't want to miss out on Steve's & my ramblings, now, would you?
Posted by AMOffenwanger at 14:16 No comments:

So it's official: amo vitam is moving house. From today on, Steve and I will be found over at Wordpress, at amovitampress.wordpress.com. However, I hope that I'll succeed in pointing www.amovitam.ca at the new site, so you can just get at it with that address. But all the old content will stay around over here; so if you feel you really can't do without the borscht recipe that's posted here or another reading of one of our poems, they're not going anywhere.

If you've had a subscription to amo vitam via email, you can continue getting the blog posts into your inbox by hopping over to the new site, simply clicking the nice little button in the top right corner of the "Home" page and putting in your email adress. In fact, please do so right this moment! That way you'll never have to miss any of our oh-so-erudite-and-amazing posts. Especially not the forthcoming announcement!

Life, the Universe, and Moving House. See you on the new page!

Posted by AMOffenwanger at 08:00 No comments: 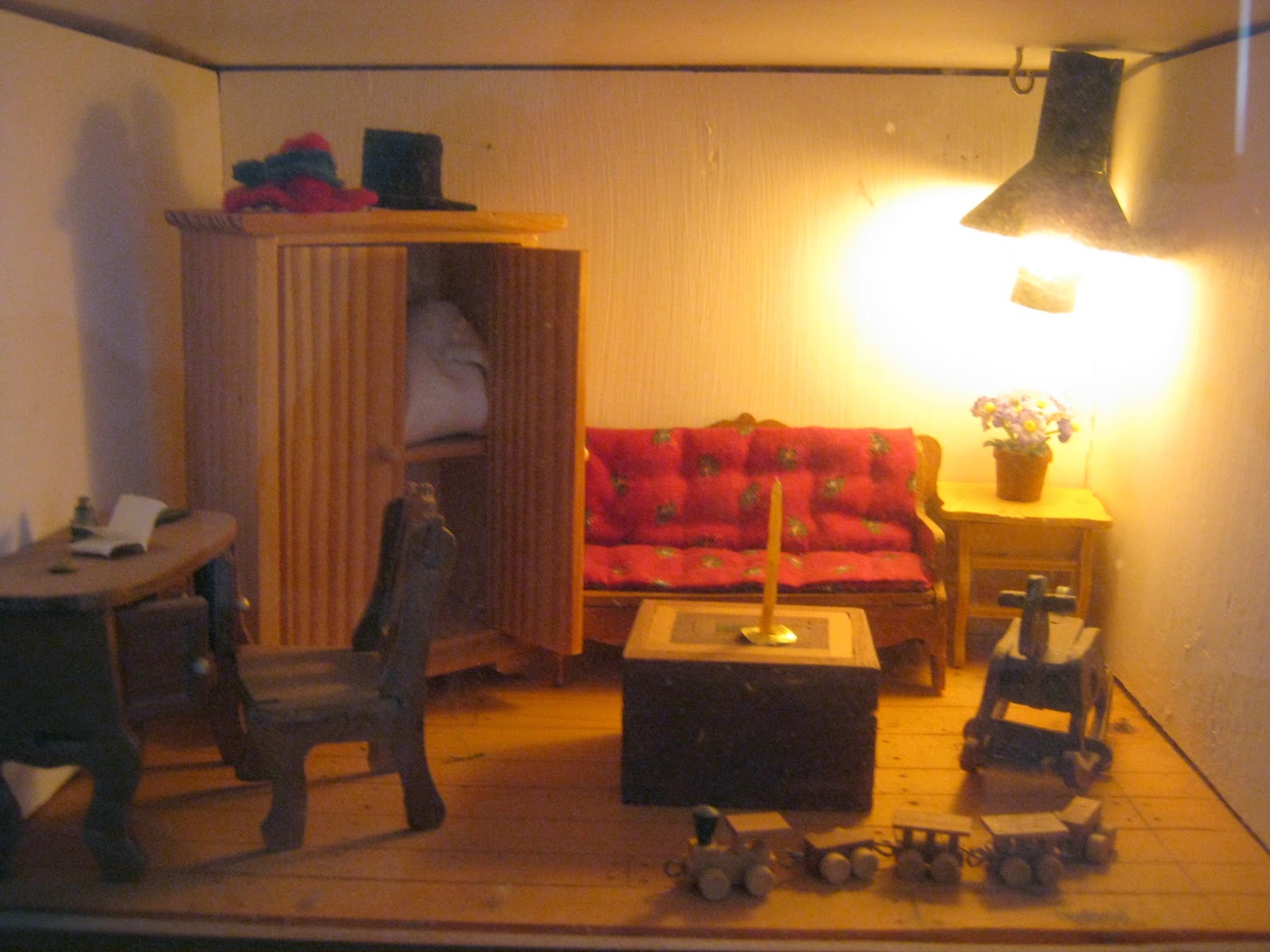 Posted by AMOffenwanger at 12:22 No comments:

I have this highly scientific, intellectual term for things that move me: they've got punch. No, not the magenta-coloured fruit drink that comes in cans of frozen concentrate. Or the equivalent, somewhat higher-class version mixed with rum that Mary Poppins takes from her medicine spoon (roll those rrrr's: "Rrrrum Punch!"), although the latter probably would have the kind of punch I'm talking about. I mean the kind of punch that socks you in the solar plexus, knocks out your breath for just a moment. In a good way, of course.

I don't know if anyone else uses that term, so I'm not sure if when I say something has punch, people actually understand me. The thing is that I haven't found any better term for that quality. I first came up with it when I was looking at art - actually, it might well have been my own. I've pulled off a few pieces that I liked, and when I tried to describe to myself why, I realised it was because they had that quality, had punch. Not too many, mind you - but a few. It's one of the most satisfying things when I create a piece with punch. I haven't painted or sculpted much lately (funny how grad school takes over your life and sucks out all your creative juices), but I'm sure if I spent a lot of time working on my art, the number of punch-y pieces would eventually increase quite a bit. See, that's what sets apart "real" artists from the dilettantes - real artists have work with punch. And the better they get, the more regular the punch.

Punch is not just found in visual arts, but also in something like this piece of writing by my friend Christopher Bunn, where he talks about joy in spite of difficulties. It's in poems that just knock you flat, because they say it so very precisely - whatever "it" is. It's in a musical composition that moves you to tears even if you don't know why.

So, if you ever show me a piece of art or writing or music you did, and I tell you it's got punch, know that you've been given one of the highest compliments I can bestow. Something with punch is more than just beautiful or skillfully executed, it's got content that moves me. Thankfully, it's not a very rare quality, I've seen it many times. It's not cheap; it does take skill, but more than that, it takes investment on the part of the artist or writer. In fact, perhaps it is that which comes through, the person of the creator, which reaches out and touches something in me.

Punch is hard to explain, which is also why I have yet to find a better, more sophisticated word to replace it. It's a quality I know when I see it, but I cannot tell you (or even myself) ahead of time how to achieve it. At least not yet. Maybe consistent punch comes with experience.

Life, the Universe, and Pieces with Punch. I know it when I see it.

Posted by AMOffenwanger at 19:54 No comments:

The Power of Music

I was feeling kind of down this morning, for a number of reasons. It's morning, it got cloudy, the political situation in our province is not good at the moment. Especially the latter. Politics really gets me down. And much as I try to stay away from it, in this case it directly affects me, so I can't. Ergo, frustration and depression.

And then a friend shared a video clip on Facebook (I'll try to embed the link). It's a group of orthodox Jewish men singing, a capella, around a table (at Seder, maybe?). It's a five-minute movie, and it hit me straight in the heart. Hit me, and lifted my spirits. I don't understand the words to their song, don't even know what language they're singing in - Yiddish, probably - but the sound cut straight through the gloom that surrounded me today. I don't know what it is about those minor keys and the strong beat of Jewish music, but it grabs me like no other and makes me want to start dancing the grapevine.

And that's the power of music. It bypasses all those intellectual barriers, the thoughts and ideas that crowd around us, and goes right for the emotional solar plexus. It crosses international, cultural and linguistic boundaries. And it has the power to soothe, to cheer, to comfort. Martin Luther said that "Once sung is thrice prayed" (which is why he wrote a great number of hymns for the purpose) - it's that powerful. It can express our hearts like nothing else can, even, or perhaps especially, when words fail or when we do not even know we need the expression. That's what I experienced today. I needed to hear that music today, and I didn't even know it.

Life, the Universe, and the Power of Music. It lifted me out of the clouds today.

Addendum: after I posted this to Facebook, another friend of mine managed to track the singers down on Youtube. Apparently it's the Shira Choir, from the States, and the song is called "Im Hashem Lo Yivneh Bayis" and was sung at a Bar Mitzvah. And here it is on Youtube:

Posted by AMOffenwanger at 09:48 No comments: 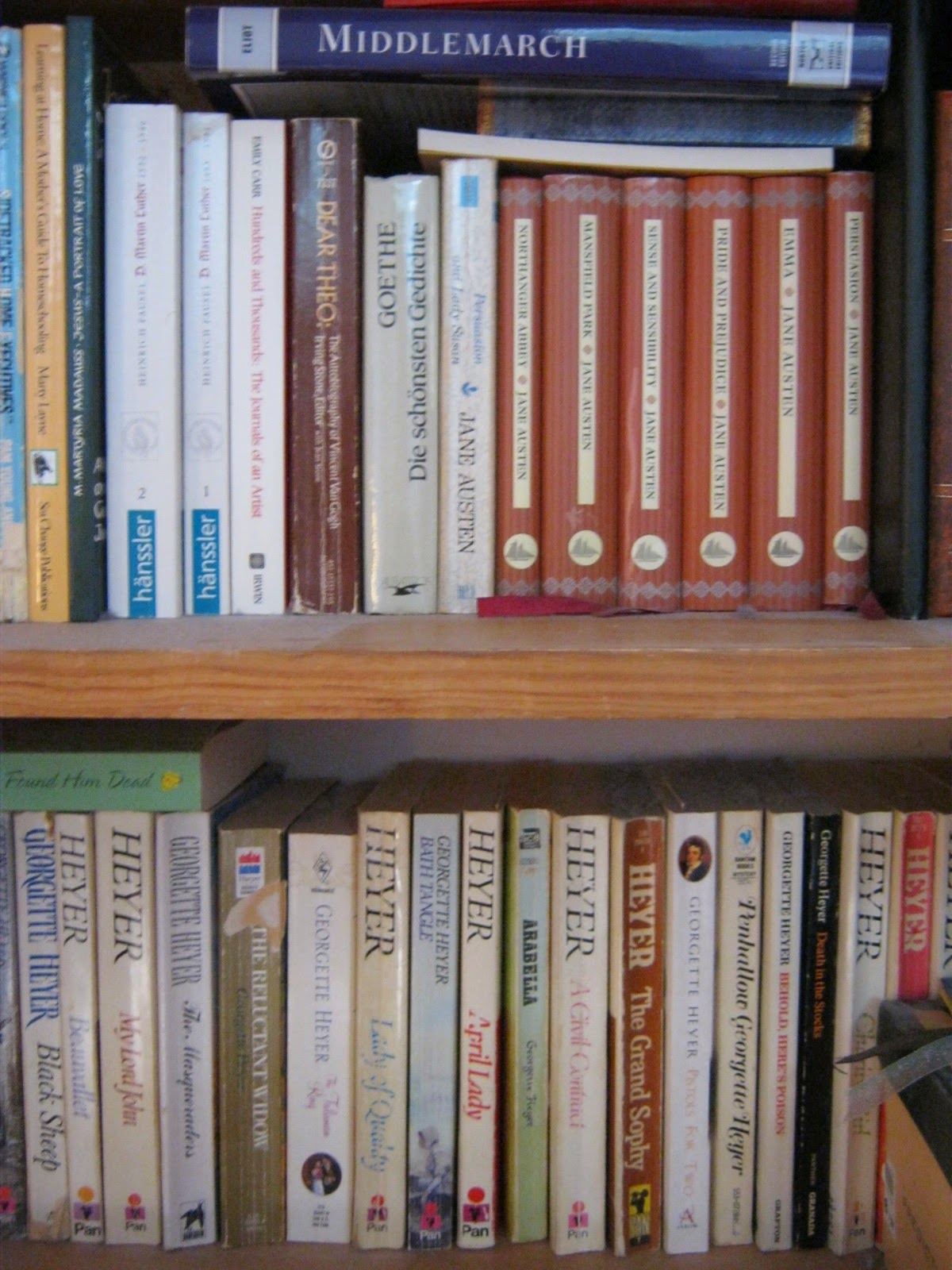 I was just nominated by a friend (who just happened to be the supervising prof for my Master's thesis) to take part in the "Ten Favourite Reads" challenge. So I rose to it (the challenge, I mean). I had to resist the urge to primarily list serious works of literature in order to make myself look good to the academics via whose postings I received the challenge, and stop myself from feeling self-conscious about including Georgette Heyer and Rosamunde Pilcher in that list. Well, actually, Pilcher didn't make the Top-10 list, sad to say - but more on that in a minute. So here it is, the honest list of ten favourite books. In fact, I couldn't pick just ten favourite books - more than half the list would have been taken up with Austen, she did write six novels. So I just picked my favourites of the favourites: ten favourite authors, and then the one story I might, by a slim margin, like better than their other works. Here goes, in no particular order:

I'm sure you're shocked and amazed at the list; you had no idea I like Austen and Heyer and the Brothers Grimm. Yeah, well.

But then, I ran into a problem: there were others (and some of them, yes, serious classic literature) that I also like - they're sort of my almost-favourites. So I ended up with a second list of ten, the runners-up:

And I'm sure if I kept going, I could end up with a third and fourth and fifth list, ad infinitum. Or, if I actually spelled out all of my favourite books by all these favourite authors, there'd be over a hundred on the first list alone. But there's limits. Really, you have to quit somewhere. So that's where.

Life, the Universe, and Favourite Reads. What's yours?
Posted by AMOffenwanger at 17:09 2 comments: