Well, darlings, I said yesterday I'd tell you about the time I was writing with a dip pen recently, so I'd better do it, eh? The telling, not the writing. 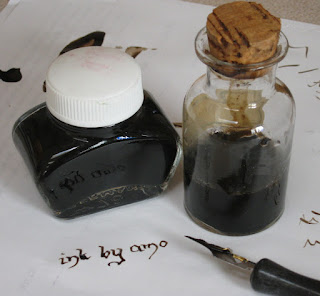 See, what went down was this: I got hijacked by another project. It happens, sometimes. Somebody is doing something really fascinating, and if I haven't got anything better to do (and, unfortunately, not infrequently even when I do have something better to do) I'm overcome by this desire to try it out, whatever it is they're doing. So this one was ink making. That's right, you heard: making ink. Out of black walnut husks.

Now, it just so happens we have a walnut tree in our garden; it was one of the few food-bearing plants that were here when we moved in. We don't usually get much from that tree, but this year, it's fairly full. So on Labour Day (which this year fell on September 3rd), I suddenly was seized by an urge to make walnut ink, and after some judicious googling to find out the recipe, proceeded to rob the tree of about two dozen of its fruits. Most of the ones I got were still green; according to information received, it'd be even better once they're all black and dry and shrivelly, but the green ones work too.

Two dozen black walnuts in the husk, chuck in a pot, cover with water. Put on to boil. Boil and boil and boil and boil. It'll stink quite horribly, and the walnuts will turn black and sludgy. Iron oxide, a.k.a. rust, will help the ink turn black rather than brown, so you can either boil your ink in a rusty cast-iron pot (but if you have one of those, shame on you for letting it go rusty! And don't you dare use it for boiling ink, but hand it over to me, and I'll clean it and season it and use it for cooking stew.) or you can do what I did, namely chuck some rusty nails in the walnut sludge. Oh, by the way, the stuff becomes a potent dye quite quickly; the wooden spoon I used to stir it went from the sort of blonde colour it started with to a lovely mahogany tone by the time I was done. Okay, so after several hours of stinky boiling (some of the recipes said to boil it for eight hours; I did more like four), you've got black sludge. Take some cheese cloth, dump sludge into it, drain it through. Put on your authentic medieval disposable latex gloves, and squeeze the cheese cloth to get as much of the ink out of the sludge as possible (the gloves are optional, but highly recommended unless you want really brown fingers. If your fingers are brown to start with, you probably don't have to worry about it). Test your ink. If it's dark enough for your liking, great; if not, put it back in the pot and boil it down. And voilà, you've got ink!

So then I put the ink in a couple of lovely ink bottles - one of them came with a chemistry set that belonged to an uncle of mine when he was a kid, so it must have been from ca. 1935 - pulled out my Speedball dip pen, and tried it out. And what do you know, it works! Fun, isn't it?

So, next time you're stranded on a deserted island full of walnut trees and rusty-nail bushes, you'll be able to do your own ink boiling, so you have something for writing your messages to stick in bottles (oh, yes, walnut ink is also semi-waterproof). Or maybe you can write your memoir. Or engage in a vigorous correspondence with the guy over on the next island, once you've traded a bottle of your ink for a ream of his paper which he made from palm tree fronds. What do you mean, paper isn't made from palm tree fronds? Fine, I'll go look it up. I'll let you know what I find, if I don't get sidetracked into papermaking next...

Life, the Universe, and Black Walnut Ink. Have you ever tried writing with a dip pen?