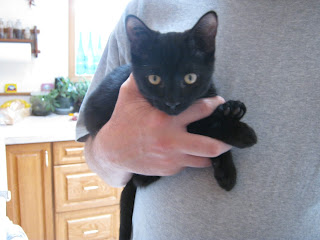 We got a new kitty. Yes, again. Our darling Morty (Napoleon/Villy/Voldemort) got out on Labour Day evening, and never came home. The coyotes were howling in the night. After shedding lots of tears, and cursing the coyotes up one side and down the other, we girded our loins and betook ourselves back to the SPCA, to find another small kittycat who might like to put our elegant Cleo's aristocratic nose out of joint.

We wanted another not-black cat - Cleo is solid black, we figured it might be too confusing to have two black shadows slinking past you in the night. There were a couple of tuxedo kitties in the kitten room, tumbled amongst their solid black brethren and sistren. (Apparently, black cats are the last ones to find homes. The only reason I can think of for it is superstition. I was going to say "the only good reason", but as far as I'm concerned that's not a good reason at all - it's profoundly silly.) So we asked to meet one of those little black-and-white kittens. And he was cute alright - cute and a bit skittish, hiding under the bench when we wanted to pet him. But while the SPCA lady had brought him out, we saw this little solid black guy hobbling around the room. Yes, hobbling. There was something wrong with his foot - a three-legged kitten.

We played with Mr Tux for a bit, and then my daughter and I looked at each other and said: "Should we meet the little three-legged guy?" Yes, we should. No question. So I asked the SPCA lady if we could, and just about got shouted at with enthusiasm - YES, absolutely we could meet him! And out he came. His back right leg is missing from the joint down; apparently he lost it shortly after birth because the umbilical cord had been wrapped around it. He hops, not unlike a rabbit - loppety-loppety-lop, he hobbled all around the visitor's room, poking his little black nose into every corner. He wasn't particularly interested in sitting on our laps, there was far too much interesting stuff to explore. But when we did catch him and hug him, he rumbled at us - LOUDLY. A small black kitten with three legs and an enormous purr.

So we had to bring him home, didn't we? Black and gimpy, he'd probably have been at be at the SPCA forever, if we hadn't. Besides, we fell in love.

And this time, there was no question about what to name him. My son, who has a knack for naming furry critters (live or toy, he usually nails it), said "We could call him Long John Silver!" Well, of course, it's obvious. Except that we actually named him Long John Charcoal, on account of the colour, you know. Beware the Three-Legged Cat! (Maybe we could get a pet mouse to go with him, and name it Jim Hawkins. And a parrot named Squire Trelawney?) 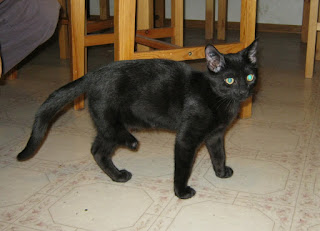 So there's Johnny Cat, singing his country music - no, Long John, limping around the ship - no, just Johnny. Johnny Kitten. Hobbling around the house - until he takes to running. Ziiiiip! up the stairs he goes, just as fast as any other cat, ziiiiiiip! across the rec room and around the corner, ziiiiiiiip-hophop! up on the kitchen table where he's got no business to be and gets a squirt of water in his face to teach him manners. He's adorable, and we love him.

Maybe Morty had to go to kitty heaven so Johnny could find a home? I miss our Morty - but Johnny is a darling, and I'm so glad we met him, that day we went to find another furry friend, and he became a part of our family. And you know what? I always wanted to adopt a crippled child. I didn't think he'd be furry, and quite this small, but there's a little bit of a childhood dream fulfilled here.

Life, the Universe, and a Gimpy Kitten. We love our Long John Charcoal.
Posted by AMOffenwanger at 10:40