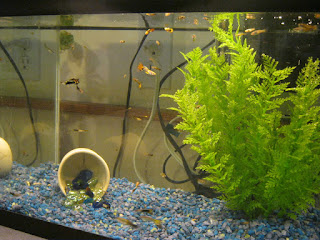 My aquarium just moved out, complete with inhabitants. I've had fish tanks of various sizes for more than a decade. And then a while ago I was saying to my daughter that I'm kind of done with aquaria - I'm tired of cleaning the tank, or, rather, not cleaning the tank and then feeling guilty about it. I'm tired of chores, and the fish tank had become just another chore. Then a few weeks ago, some of my daughter's friends moved into a basement suite together, and they were over here admiring our fish tank (in spite of its not being terribly clean at the time). So, guess what? The fishies moved house today.

It all started more than thirteen years ago with a ten-by-ten-by-ten-centimetre plastic cube which contained some gravel, a small aquatic plant, a snail and two pretty little common guppies. The whole setup called itself an "Aquababy" or some such thing; it should have been more accurately named a fish killing device. However, in my ignorance, I bought one of those things from the stall in the mall (it was Christmas time; I suppose that's considered an adequate time to murder innocent little fishies by the dozens), brought it home, and put it on the shelf by the computer. It had a fairly tight lid with a 3mm hole in it, through which one was meant to insert a toothpick dipped in fish food to give the darlings their required nourishment. Oxygen, it seemed, was not necessary for their survival - or rather, the vendors said the fish would get enough of that from the small piece of hornwort stuck in there with them. You know, it's a plant, so it makes oxygen. Right.

Well, let's draw a veil over the whole sorry episode. In my excuse I can only plead ignorance of the finer points of fish keeping - well, to be honest, of any points at all, fine or coarse. Suffice to say, the ignorance lasted no longer than those first little fish. They had become martyrs to the cause of my education - I thoroughly caught the aquarium-keeping bug. I researched, researched and researched some more, got books and found websites, and finally treated myself to my first real aquarium, a small 1-gallon thing with an undergravel filter. Then the neighbour gave us an old 5-gallon tank (with chrome edging, no less!) which was quite large for our really small house, and finally I got a 10-gallon and then a 20-gallon tank (and a larger house to set them up in). I've had guppies (common and fancy), goldfish (ditto), some zebra danios, red-eyed tetras (very boring, those. All they did was hide behind the plants), and I think even some neon tetras at one point. Oh, and a few Siamese Fighting Fish (one at a time), those were fun.

Most of them were fairly short-lived. I don't know if there's an equivalent of a green thumb when it comes to fish keeping - a scaly forefinger, perhaps? Well, whatever it is, I haven't got it. I finally decided I was only ever going to keep simple fish any more - common goldfish or guppies. So that's what I did. Some time ago, probably five or six years, I bought three pairs of fancy guppies - one blue, one red, and one yellow male, and their corresponding plain-grey girlfriends. Into the ten-gallon tank they went, and they've been merrily reproducing ever since. In the current generation the colours and patterns of their ancestors are thoroughly mixed up - there are some multi-coloured iridescent fellows with long black tails, some yellows with leopard spots, some with lots of red and some with mostly blue.

And now they've moved out, those fishy friends. I have a lovely empty spot on my kitchen counter now, and no more responsibilities for monthly algae scrapings and water changes.

They were lots of fun while I had them, those fish. And now I'm glad that someone else will get to have the pleasure of watching them undulate through the water, greedily swarming to the top when you turn on the light and open the lid, and chase each flake of food as if it were the last they will ever see. I hope they enjoy each other, the fish and their new people.

Life, the Universe, and Piscine People. Farewell, dear fishies, and thank you for the enjoyment of having you around. 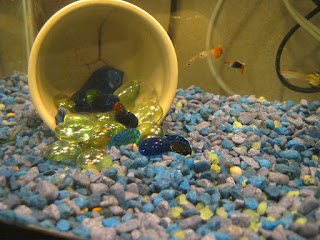 Email ThisBlogThis!Share to TwitterShare to FacebookShare to Pinterest
Labels: aquarium, fish, moving out